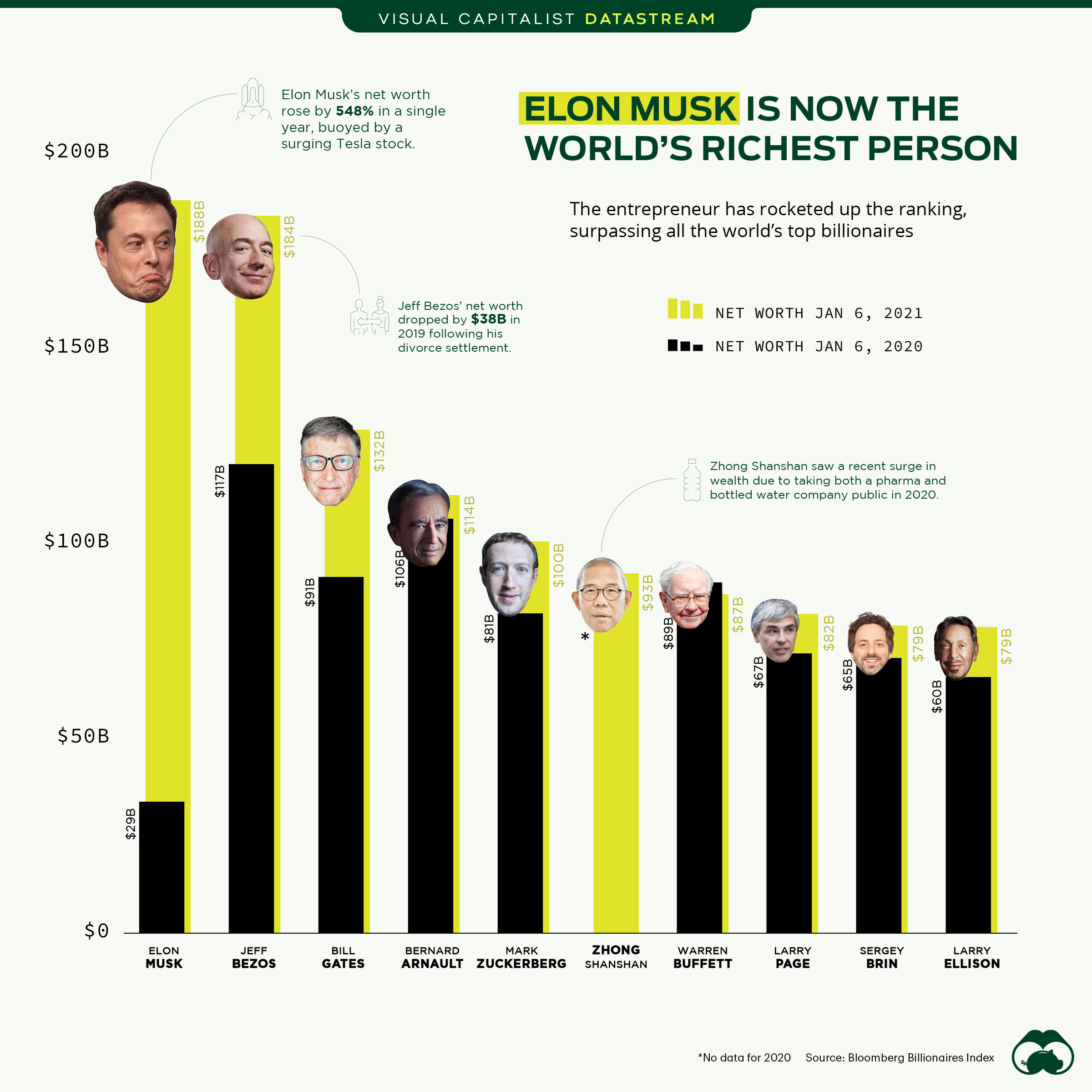 Top 10 Richest Person in The World 2021. As per the Bloomberg Billionaires Index, Elon Reeve Musk of the US is the richest person in the world with a net worth of US$195 billion on 8 January 2021.

Top 10 Richest Person in The World 2021. One year ago, he wouldn’t have cracked the top 20 list—but with a surge in the wealth of 548% since a year ago, he now sits at the top of the heat as the world’s richest person.

Is this a temporary bump, or will Elon Musk stay atop the world’s richest person rankings for the rest of 2021?

Really, it all depends on Tesla’s stock price performance—and those that have bet against Tesla in recent years don’t have a great track record to lean on.

1. Elon Musk ($195 billion, US): Founder, CEO, CTO and chief designer of SpaceX and CEO and product architect of Tesla, Inc, has become the world’s richest man, pushing Amazon founder Jeff Bezos on the second spot, according to Bloomberg Billionaires Index.

2. Jeff Bezos ($185 billion, US) He founded the e-commerce giant company Amazon in 1994 out of his garage in Seattle. He is the CEO of this company and owns an 11.1% stake. He would have been richer if he had not divorced his wife MacKenzie in 2019 after 25 years of marriage. He had to transfer a quarter of his Amazon stake to his wife.

3. Bill Gates ($134 billion, US): The Microsoft co-founder has been, for years, seen as the “face” of the position of the wealthiest person in the world. Gates co-founded Microsoft with childhood friend Paul Allen in 1975. He stepped down as its CEO in January 2000 but continued as chairman, a post he resigned from in February 2014. Gates also founded the Bill & Melinda Gates Foundation, with his wife Melinda, in 2000.

4. Bernard Arnault ($116 billion, France): The richest Frenchman and the richest non-American, Arnault was briefly the wealthiest person in the world as well, in December 2019 and January 2020. He is the chairman and chief executive of Louis Vitton SE, the world’s largest luxury goods company.

5. Mark Zuckerberg ($102 billion, US): Zuckerberg, the chairman and co-founder of Facebook, is the only person under 40 in Forbes’ list of the 20 richest people. In November 2007, Zuckerberg, then aged 23, became the world’s youngest “self-made” billionaire. He has also featured regularly on the lists of the world’s most powerful and influential people.

6. Zhong Shanshan ($93.1 billion, China): The richest person in Asia and his native China, Shanshan is the founder-chairperson of Nongfu Spring, the country’s largest beverage company. In December 2020, he went past Indian business tycoon Mukesh Ambani to become Asia’s richest person.

7. Warren Buffet ($88.2 billion, US): Overtaken by Shanshan as the sixth richest person in January 2021, Buffet is one of the world’s most successful investors. He is also the chairman and CEO of Berkshire Hathaway, which, according to Forbes, is the eighth-largest public company in the world.

9.Sergey Brin ($81 billion, US): The other Google co-founder, Brin served as president of Alphabet Inc till December 2019. Born in 1973 in the Soviet Union, Brin immigrated to the US with his family at the age of six.

10. Larry Ellison ($80 billion, US): Rounding off the top 10 is Ellison, the co-founder and chief technology officer (CTO) of Oracle. In October 2019, Forbes listed him as the sixth richest person in the world, the highest position he has achieved.

Where does this data come from?

Source: Bloomberg Billionaire Index
Details: Jan 6th, 2021 data
Notes: Net worth figures on the tracker get updated frequently, so any up-to-date data may not match that of this article.